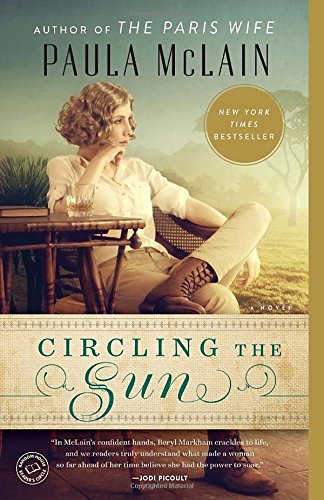 Circling the Sun: A Novel

NEW YORK TIMES BESTSELLER • NAMED ONE OF THE BEST BOOKS OF THE YEAR BY NPR, BOOKPAGE, AND SHELF AWARENESS • “Paula McLain is considered the new star of historical fiction, and for good reason. Fans of The Paris Wife will be captivated by Circling the Sun, which . . . is both beautifully written and utterly engrossing.”—Ann Patchett, Country Living

Paula McLain, author of the phenomenal bestseller The Paris Wife, now returns with her keenly anticipated new novel, transporting readers to colonial Kenya in the 1920s. Circling the Sun brings to life a fearless and captivating woman—Beryl Markham, a record-setting aviator caught up in a passionate love triangle with safari hunter Denys Finch Hatton and Karen Blixen, who as Isak Dinesen wrote the classic memoir Out of Africa.

Brought to Kenya from England as a child and then abandoned by her mother, Beryl is raised by both her father and the native Kipsigis tribe who share his estate. Her unconventional upbringing transforms Beryl into a bold young woman with a fierce love of all things wild and an inherent understanding of nature’s delicate balance. But even the wild child must grow up, and when everything Beryl knows and trusts dissolves, she is catapulted into a string of disastrous relationships.

Beryl forges her own path as a horse trainer, and her uncommon style attracts the eye of the Happy Valley set, a decadent, bohemian community of European expats who also live and love by their own set of rules. But it’s the ruggedly charismatic Denys Finch Hatton who ultimately helps Beryl navigate the uncharted territory of her own heart. The intensity of their love reveals Beryl’s truest self and her fate: to fly.

Set against the majestic landscape of early-twentieth-century Africa, McLain’s powerful tale reveals the extraordinary adventures of a woman before her time, the exhilaration of freedom and its cost, and the tenacity of the human spirit.

Praise for Circling the Sun

“In McLain’s confident hands, Beryl Markham crackles to life, and we readers truly understand what made a woman so far ahead of her time believe she had the power to soar.”—Jodi Picoult, author of Leaving Time

“Enchanting . . . a worthy heir to [Isak] Dinesen . . . Like Africa as it’s so gorgeously depicted here, this novel will never let you go.”—The Boston Globe

“Famed aviator Beryl Markham is a novelist’s dream. . . . [A] wonderful portrait of a complex woman who lived—defiantly—on her own terms.”—People (Book of the Week)

“Like its high-flying subject, Circling the Sun is audacious and glamorous and hard not to be drawn in by. Beryl Markham may have married more than once, but she was nobody’s wife.”—Entertainment Weekly

“[An] eloquent evocation of Beryl’s daring life.”—O: The Oprah Magazine

“Markham’s life is the stuff of legend. . . . McLain has created a voice that is lush and intricate to evoke a character who is enviably brave and independent.”—NPR

“Paula McLain has such a gift for bringing characters to life. I loved discovering the singular Beryl Markham, with all her strengths and passions and complexities.”—Jojo Moyes, author of Me Before You

From the Hardcover edition.

An Amazon Best Book of July 2015: Sometimes a reader craves a good, old-fashioned yarn. This much anticipated novel from the author of The Paris Wife is exactly that: an engrossing story of love and adventure in colonial Africa, complete with gorgeous landscape, dissolute British ex-pats, and lots of derring-do with horses, motorcars and airplanes. That it is also the best kind of contemporary historical novel – the kind that teaches you something about the real people and events of the time – is a bonus. At the center of the novel is Beryl Markham (born – you gotta love it – Clutterbuck), the headstrong daughter of a British colonial who grew up more comfortable among the people and animals of her adopted Kenya than in the homes of its landed gentry. When Beryl’s mother leaves the family and her father gives up the farm, she marries (at 16) a gentleman farmer, a drunk too louche to be much of a husband. Like privileged but love-hungry teenage girls past and future, Beryl seeks companionship from her horses, becoming the first and greatest female horse trainer in the region. Along the way, she hobnobs with Kenyan high society, including, but not limited to, Karen Blixen (who authored her own epic story, Out of Africa, under the pen name Isaak Dinesen) and her lover Denys Finch Hatten (who will always be Robert Redford to those of us who watched him play the role in the movie version of Dinesen’s book.) Much bed-hopping and relationship-boundary-pushing ensue, with all the teeth-gnashing and yearning that goes along with it, no matter the era. Those who knew about Markham before reading this book may be surprised by how little there is about her as a pilot. She is, after all, the first woman to fly across the Atlantic from east to west, and she wrote her own memoir, 1942’s West with the Night; here, it is only in the book’s frame – a prologue and its final chapter – that we get a glimpse of the way that Beryl will, literally, soar. But McLain doesn’t seem interested in portraying her as a trailblazing feminist with an idea about changing the world; the Beryl Markham here is noteworthy precisely because she is NOT those things so much as a girl who grew up pushing back against conventions that got in her way. “But you’ve never been afraid of anything, have you?” Finch Hatten says to her in their last meeting. “I have, though,” she replies. “I’ve been terrified. . .I just haven’t let that stop me.” — Sara Nelson