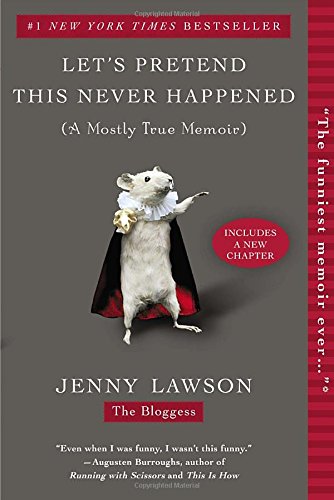 From the New York Times bestselling author of Furiously Happy…

When Jenny Lawson was little, all she ever wanted was to fit in. That dream was cut short by her fantastically unbalanced father and a morbidly eccentric childhood. It did, however, open up an opportunity for Lawson to find the humor in the strange shame-spiral that is her life, and we are all the better for it.

In the irreverent Let’s Pretend This Never Happened, Lawson’s long-suffering husband and sweet daughter help her uncover the surprising discovery that the most terribly human moments—the ones we want to pretend never happened—are the very same moments that make us the people we are today. For every intellectual misfit who thought they were the only ones to think the things that Lawson dares to say out loud, this is a poignant and hysterical look at the dark, disturbing, yet wonderful moments of our lives.

Lancaster: You appear to have a soft spot for dead, stuffed creatures, particularly if they’re clad in bowler hats or acting out a scene–please explain.

Lawson: My father is a professional taxidermist, so it’s not like I had a fighting chance. And besides, I think the real question here is, who wouldn’t be interested in ferrets in cancan dresses? Old anthropomorphic taxidermy is fascinating and I’ve collected an entire menagerie of creatures that make up my personal posse. Cuban pirate alligators, Shakespearean mice, heavily armed squirrels, vampire-slaying ducklings. I’m not sure how you say no to those. My husband can, but I’m fairly sure there’s something not right about him. Anyone who can turn his nose up at the Last Supper constructed of Victorian kittens has a problem. I suspect it’s because he’s a Republican.

Lancaster: Who would you say is more powerful, The Bloggess Army or the KISS Army? Compare and contrast.

Lawson: My gut says the Bloggess Army is a bit more intimidating because we don’t dress up like kitties, but I’d probably still pick the KISS Army because Gene Simmons scares the shit out of me. Plus, my fans are less of an army and more of a collection of misfit minions looking to have a good time. Actually, now that I think about it, there’s probably a lot of crossover with the KISS Army. We should host a potluck together.

Lancaster: Can you believe some people don’t know what a confidence wig is?

Lawson: Right?! It’s shocking how often I walk in with one and I hear people whispering about the poor cancer patient that just walked in. I’m not a cancer patient, people. I just wear a wig to increase confidence. Plus, if I really mortify myself, I can just run to the bathroom, throw away the wig, and come back in and ask everyone who invited the crazy blonde that just crawled out of the bathroom window. There is no downside.

Lancaster: What’s it going to take for Nathan Fillion to send you a photo of himself holding a ball of twine?

Lawson: I think it’s going to take Nathan Fillion holding a ball of twine. I’ve offered him thousands of dollars and he still rebuffs me. I have no idea what the hold up is, but I can only imagine that Nathan Fillion is allergic to either twine or to bringing smiles to the faces of strange women who really aren’t asking for that much, Nathan.

Lawson: “Means never having to say you’re sorry. Because it’s not towels.”

Lawson: Alphabetically, or in order of who is most likely to fuck up the youth of America? Because those are two different answers. Or possibly they aren’t, now that I think about it.

Lancaster: What would you be doing if you weren’t writing? (“Hard time” is an acceptable and, frankly, the anticipated answer, FYI.)

Lawson: Well, I was going to say “hard time” but now you’ve ruined it. Which makes me feel stabby. Which leads to hard time. I think this is an example of circular logic. In real life, though, I’d be writing. Before my book it was blogging and before blogging, it was journaling and several times in between, it was graffiti. Writers write always. I thought Ray Bradbury said that, but I can’t find the quote anywhere so I’m taking credit for it. Writers write always.

Lancaster: I don’t consider you a mommyblogger, but many PR companies do. What’s the worst pitch you’ve gotten?

Lawson: Once a PR exec accidentally “replied to all” and called me “a fucking bitch” after I asked them to stop sending me pitches about a Kardashian wearing panty hose. He replied that I should feel flattered that I was even viewed as relevant enough to be pitched to, and I replied “Please stand by for a demonstration of relevancy” and tweeted it out to hundreds of thousands of people. It was kind of awesome. And terrifying.

Lawson: Wil Wheaton. Unless we’re doing the “destroying America thing” again. Then I have to recalculate. William Shatner and I are still recovering from a feud that was covered by MSNBC and Gawker when he refused to come to my house after I apparently offered him the wrong type of hooker. That man is a damn diva. Wil Wheaton, on the other hand, is an officer and a gentleman. William Shatner could learn a lot from that man.

Lancaster: If you had one piece of advice for someone hoping to follow your career path, what would it be?

Lawson: My one word of advice would be “FORTHELOVEOOFGODDON’T.” I’ve fallen backward into this, and I have done every single thing wrong. I have no sacred cows and am fairly unmarketable to any mainstream advertisers. I burn bridges because I like the pretty way they glow and I do exactly the opposite of everything I’m ever told to do. Thank God there’s a steady stream of intellectual misfits and misanthropic joy-seekers who get me, because that’s the only thing that’s saved me. Finding my tribe was a great gift that the Internet gave me. I returned the favor with tweets about shit my cat was doing. We’re pretty even.

Lancaster: What’s it like to ride around in your head for the day?

Lawson: Cramped. Exhausting. Exhilarating. Baffling. I have no way to compare it, but whenever I let slip the bizarre things I’m thinking about, people seem alarmed and step away slowly, so I think “disorientating” is probably fair as well.