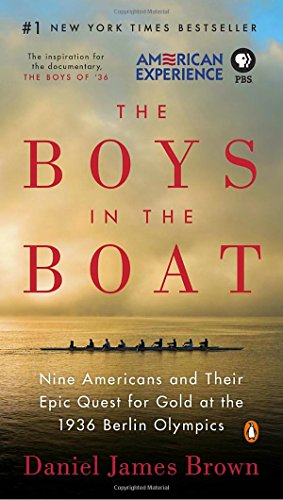 The Boys in the Boat: Nine Americans and Their Epic Quest for Gold at the 1936 Berlin Olympics

The #1 New York Times–bestselling story about American Olympic triumph in Nazi Germany, now in a premium mass market edition. Available just in time for The 80th anniversary of the boys’ gold medal win as well as the 8/2 broadcast of the PBS /American Experience documentary, The Boys of ’36. and the start of the 2016 Summer Olympics.

For readers of Unbroken, out of the depths of the Depression comes an irresistible story about beating the odds and finding hope in the most desperate of times—the improbable, intimate account of how nine working-class boys from the American West showed the world at the 1936 Olympics in Berlin what true grit really meant.

It was an unlikely quest from the start. With a team composed of the sons of loggers, shipyard workers, and farmers, the University of Washington’s eight-oar crew team was never expected to defeat the elite teams of the East Coast and Great Britain, yet they did, going on to shock the world by defeating the German team rowing for Adolf Hitler. The emotional heart of the tale lies with Joe Rantz, a teenager without family or prospects, who rows not only to regain his shattered self-regard but also to find a real place for himself in the world. Drawing on the boys’ own journals and vivid memories of a once-in-a-lifetime shared dream, Brown has created an unforgettable portrait of an era, a celebration of a remarkable achievement, and a chronicle of one extraordinary young man’s personal quest.

Daniel James Brown’s The Boys in the Boat is the kind of nonfiction book that reads like a novel. Centered around the life of Joe Rantz—a farmboy from the Pacific Northwest who was literally abandoned as a child—and set during the Great Depression, The Boys in the Boat is a character-driven story with a natural crescendo that will have you racing to the finish. In 1936, the University of Washington’s eight-oar crew team raced its way to the Berlin Olympics for an opportunity to challenge the greatest in the world. How this team, largely composed of rowers from “foggy coastal villages, damp dairy farms, and smoky lumber towns all over the state,” managed to work together and sacrifice toward their goal of defeating Hitler’s feared racers is half the story. The other half is equally fascinating, as Brown seamlessly weaves in the story of crew itself. This is fast-paced and emotional nonfiction about determination, bonds built by teamwork, and what it takes to achieve glory. —Chris Schluep