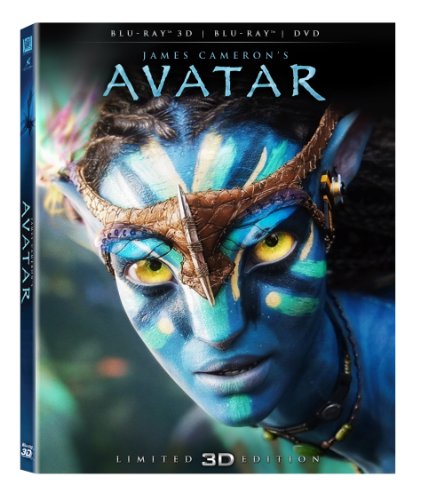 James Cameron’s AVATAR comes to life as never before – now in eye-popping 3D for the ultimate home viewing experience.After 12 years of thinking about it (and waiting for movie technology to catch up with his visions), James Cameron followed up his unsinkable Titanic with Avatar, a sci-fi epic meant to trump all previous sci-fi epics. Set in the future on a distant planet, Avatar spins a simple little parable about greedy colonizers (that would be mankind) messing up the lush tribal world of Pandora. A paraplegic Marine named Jake (Sam Worthington) acts through a 9-foot-tall avatar that allows him to roam the planet and pass as one of the Na’vi, the blue-skinned, large-eyed native people who would very much like to live their peaceful lives without the interference of the visitors. Although he’s supposed to be gathering intel for the badass general (Stephen Lang) who’d like to lay waste to the planet and its inhabitants, Jake naturally begins to take a liking to the Na’vi, especially the feisty Neytiri (Zoë Saldana, whose entire performance, recorded by Cameron’s complicated motion-capture system, exists as a digitally rendered Na’vi). The movie uses state-of-the-art 3D technology to plunge the viewer deep into Cameron’s crazy toy box of planetary ecosystems and high-tech machinery. Maybe it’s the fact that Cameron seems torn between his two loves–awesome destructive gizmos and flower-power message mongering–that makes Avatar‘s pursuit of its point ultimately uncertain. That, and the fact that Cameron’s dialogue continues to clunk badly. If you’re won over by the movie’s trippy new world, the characters will be forgivable as broad, useful archetypes rather than standard-issue stereotypes, and you might be able to overlook the unsurprising central plot. (The overextended “take that, Michael Bay” final battle sequences could tax even Cameron enthusiasts, however.) It doesn’t measure up to the hype (what could?) yet Avatar frequently hits a giddy delirium all its own. The film itself is our Pandora, a sensation-saturated universe only the movies could create. –Robert Horton