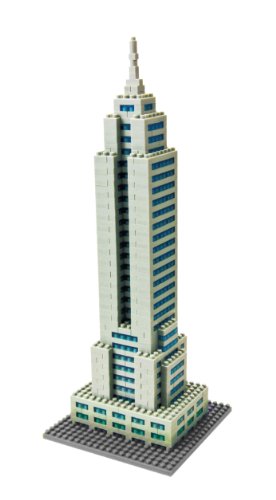 You don’t have to be an engineer to create with nanoblock! With these micro-sized building blocks, 3D structures are constructed like never before! Watch in amazement as all structures are erected to the tiniest detail. Watch as New York City’s famous Empire State Building take shape beneath your fingertips with 740 assorted size and colored pieces. Finished size: 3.125″ w x 3.125d x 8.44 h Collect all the nanoblock USA collection today!

Construct one of the world’s most iconic buildings in small, yet precise, detail with the Nanoblock Empire State Building. Using building blocks only millimeters wide, this fun and challenging set recreates the massive Empire State Building on a miniature scale. Standing just over 8 inches when constructed, this 740-piece set lets you create a detailed replica of one of the Seven Wonders of the Modern World that fits in the palm of your hand.

Enjoy a trip around the world with your own micro-sized Empire State Building from the nanoblock “Sites to See” series. View larger.

Recreate One of the World’s Most Iconic Structures

The Empire State Building is one of the most famous structures ever erected. For many years the largest building on Earth, the Empire State Building is considered one of the Seven Wonders of the Modern World. Using microsized building blocks, Nanoblock has recreated this iconic structure in precise detail on a truly miniature scale. This 740-piece set recreates the 102-story skyscraper in impressive detail, though the finished product is small enough to fit in the palm of your hand.

Our testing team found assembling this 3D puzzle to be an enjoyable and exacting task. Although it could probably be assumed, Nanoblock sets are more suited for those with smaller hands as opposed to larger ones. With easy-to-follow color directions, this puzzle can be enjoyed equally by young children as well as adults–though young children might have an advantage in assembling it as they have much tinier hands. Nanoblock indicates the intended age for this set is eight and up, but younger builders who are familiar with building blocks and following instructions would probably be able to complete this set without problems.

Featuring building blocks as small as 4 by 4 by 5 millimeters (L x W x H ), Nanoblock uses a unique interlocking method called double fin technology to create pieces a fraction of the size of other blocks. Already a sensation in Japan, Nanoblock is bringing the 3D minimodeling craze to the rest of the world, offering fun and challenging puzzles for builders of all ages.

What’s in the Box