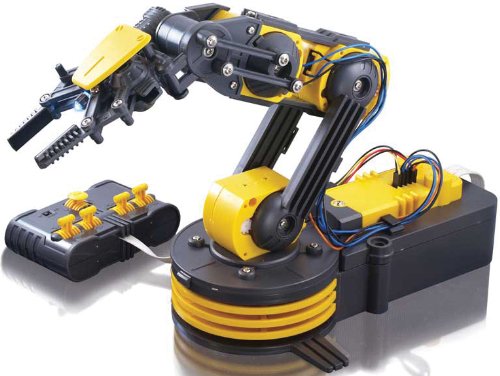 Riding the wings of the award winning Robotic Arm Trainer; OWI has made robotic arm technology more affordable without compromising quality. With Robotic Arm Edge 535; command the gripper to open and close; wrist motion of 120 degrees; an extensive elbow range of 300 degrees; base rotation of 270 degrees; base motion of 180 degrees; vertical reach of 15 inches; horizontal reach of 12.6 inches; and lifting capacity of 100g. WOW! Some of the added features include a search light design on the gripper and a safety gear audible indicator is included on all five gear boxes to prevent any potential injury or gear breakage during operation. How does this equate to fun? Total command and visual manipulation using the 5s: five switch wired controller; five motors; and five joints. Night time play is possible and extended life on the gearbox to prolong your control and predictions of the robot’s behavior. Hall of Fame Inventor Endorses OWI’s Robotic Arm Edge “To demonstrate or teach, this is the best kit of its kind. It’s a superior product.” – George Devol George Devol, the inventor of the first ever robotic arm, highly recommends theRobotic Arm Edge. As an inventor he has over 40 patents and is the president of Devol Research. In addition to creating the first ever industrial robotic arm, Mr. Devol has also been inducted into the National Inventor’s Hall of Fame and Automation Hall of Fame. In 2005, Popular Mechanics selected Devol’s robotic arm as one of the “Top 50 Inventions of the Past 50 Years.” OWI is honored to receive his support. Mr. Devol’s inventions can be seen in both the Smithsonian and Henry Ford Museums